Electric iron is one of the important fusing machines used for making fusible interlining. Electric iron is used for batch method or discontinuous method of fusing. This method is not so suitable for large scale apparel industry. It is generally used for small scale interlining production. It is mostly used in bespoke garment making. 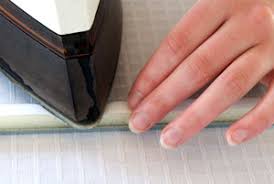 By the above working methods, we will get an apparel parts with fusible interlining.

Quality of Parameters: In this electric iron fusing machine; heat and pressure is not controllable and time is controllable.

The advantage of electric iron is that, the initial cost is low. But it is not suitable for bulk production because it is a discontinuous process where fusing parameters are not fully controlled by the electric iron machine.